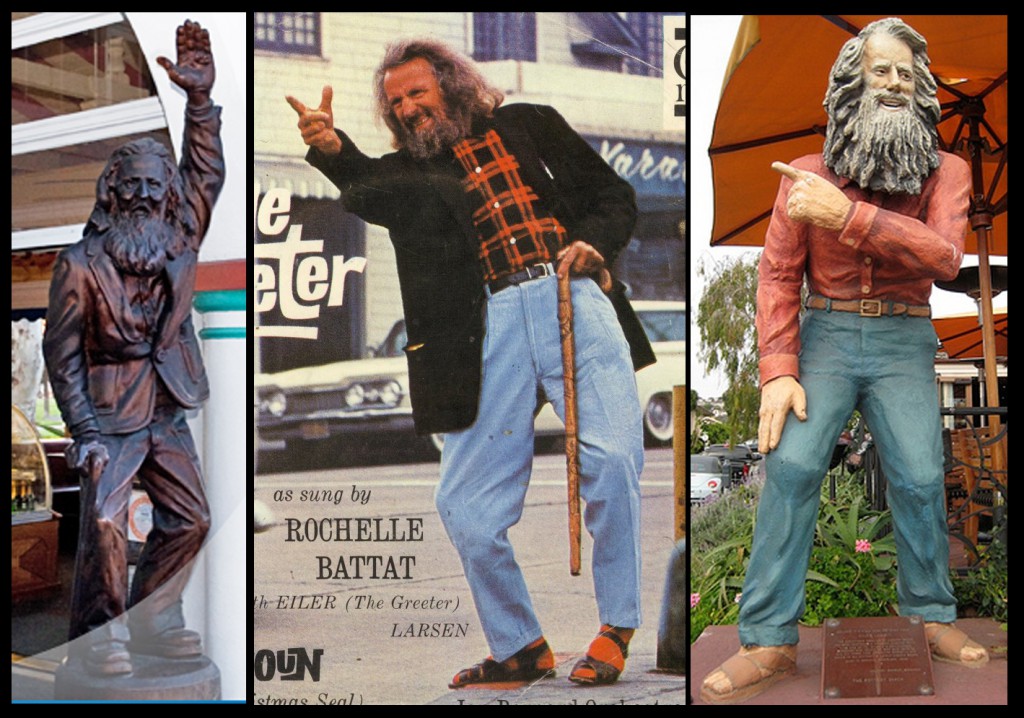 For any of you coming to Laguna Beach prior to 1975 may remember Eiler Larsen, for his welcoming wave and booming voice. For almost 40 years, he was the official Greeter of Laguna. Rain or shine, you could find him standing on Pacific Coast Highway, waiving to the visitors of Laguna Beach, and booming “Helloo-ooo”.
Before he settled in Laguna, “He had wandered the world, selling butter in czarist Siberia, fighting in France during World War I, walking the Appalachian Trail with his dog — and strolling down Colorado Boulevard, unofficially bringing up the rear of the Rose Parade one year.” (LA Times) Before finally settling in Laguna, Larsen first began ‘greeting’ in Washinton, D.C., waiving next to the White House. He even recalls one time when President Hoover waved to him. With the persuasion of friends, he headed out to Laguna to try out for the Pageant of the Masters. For several years he was cast as Judas in “The Last Supper”.
In 1959, some residents complained and wanted him silenced, but after a poll, 88% of residents wanted him to stay. And stay he did, throughtout the years, putting smiles on passersby faces. It was four years later that Laguna Beach City Council honored his kindness, and proclaimed him the town’s official greeter. Althought this title was unpaid, it gave him benefits like free meals, and low-rent at one of the local hotels. Even then, his resident fans all piched in and paid his bills, just because “they liked what he added to the local color.” (LA Times)
In 1967 he suffered a stroke, and emphysema slowed him down. For the next eight years, locals and visitors would miss him from his spot along PCH, but he still got out there when he could. The fan letters piled high, “I can’t possibly answer all the letters, but people must know I appreciate them because they send more letters each time,” Larsen told The Times. Then in 1975, at the age of 84, Larsen passed away, but left behind a memory to many. Although many have tried to become the next greeter, no one could quite fill Larsen’s shoes.
In memory of The Greeter, you can find his footprints, on the corner of PCH and El Paseo Drive, which were dedicated in a ceremony in 1964. Also, there are two statues erected in his honor. The first statue stands outside the Pottery Place where he spent a short stint working, and the second stands outside of The Corner Greeter restaurant. So if you get a chance, make sure to stop by one, or both, and take your picture with the Laguna icon.

This entry was posted in Blog. Bookmark the permalink.